In the extreme North-western side of Rwanda sits a spectacular Volcanoes National Park (Parc National des Volcano), one of the Virunga Conservation Areas located adjacent to the D.R. Congo and Uganda’s Mgahinga Gorilla National Park. Volcanoes National Park attracts the majority of gorilla safari travelers who come to see the endangered mountain gorillas. The Park protects a good number of the remaining mountain gorilla population currently estimated to be 1063 in the world.

Volcanoes National Park was a research base for the late Dian Fossey and it is, without doubt, a mountain gorilla paradise with 5 of the 8 Virunga Volcanoes- Bisoke, Karisimbi, Sabyinyo, Muhabura, and Gahinga all found in this Park. It is comprised of rainforest and bamboo where a range of its wildlife live. 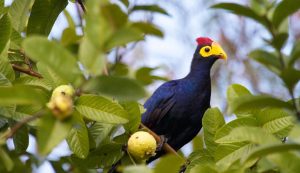 Tour Activities to do while at Volcanoes National Park 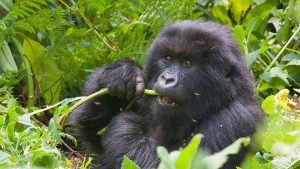 Volcanoes National Park is most visited primarily for gorilla trekking. The park is home to all 12 habituated mountain gorilla groups and these are visited by a maximum of 8pax a day. All treks to see the park’s gorillas start at Kinigi after briefing and allocation of gorilla groups, then you set off to visit a family of these endangered species starting at 8:00 am.

A day gorilla trek to see gorillas take 2-6 hours and you will be accompanied by the park guide. On getting a gorilla family, a maximum of 1 hour will be spent face to face with these apes including photography and learning about their behaviors then you return to the lodge or where you were briefed to meet the driver guide.

To track Rwanda gorillas in Volcanoes National Park valid gorilla permits are required and each permit costs US Dollars 1500 per trekker per day. You can book a Rwanda gorilla permit via a local tour operator or directly with Rwanda Development Board- RDB. The permits should be booked earlier 2 to 6 months pre-visiting Volcanoes National Park for actual gorilla trekking. 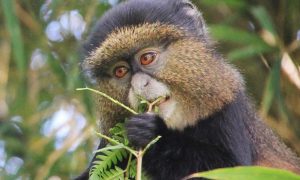 Golden monkey tracking is a unique primate adventure awaiting tourists to be part of Rwanda safaris in Volcanoes National Park. For golden monkey encounters, there are 2 habituated troops available for tourists to visit. Trekking to view golden monkeys begins with a briefing on rules/measures and permits can be booked at US Dollars 100 per person.

Dian Fossey tomb trek is a 5-6 hours walk to and from the graveyard. This is entirely about getting a deep insight into Dian Fossey’s gorilla conservation legacy. She is remembered for her great research work and conservation efforts to save mountain gorillas. To aid her research activities in the Virunga Volcanoes, she set up the Karisoke Research Centre and hikes to the Dian Fossey tomb site costs US Dollars 100.

Cave exploration is the other special activity awaiting you on Volcanoes National Park safari. The cave tours are conducted at Musanze caves located adjacent to the park, and they date back to 65 million years. In 2013, these caves were officially opened for tourism and the public. They are 2kms long and take a good time to explore its unique history and formation, etc.

Lake Burera and Ruhondo are some of the areas of interest while on tour in Volcanoes National Park. They are located close to the park and are best to visit for boat riding.

Cultural encounter is also possible in Iby’Iwacu cultural village adjacent to the park. This village is inhabited by the ex-poachers who have transformed from poaching habits to now promoters of gorilla conservation.

Tour activities in Volcanoes National Park can be done at any time of the year. But, the dry season is the best time to consider visiting the park for gorilla trekking or golden monkey tracking. There are 2 phases of dry season experienced at the park- June to September and December to February. Birding tours are best carried out during the wetter or rainy months of the year- March to May or October to November.

Accommodation in and around Volcanoes National Park- Rwanda

How to get to Rwanda Volcanoes National Park

By road: From Kigali to Volcanoes National Park Ruhengeri is a 2-3 hours drive and a 4×4 vehicle is the best choice for all your road trips. You can also connect from Kabale or Kisoro, Southwestern Uganda via Katuna or Chanika border to Ruhengeri within a 4-5 hours drive.