Lake Kivu is located on the Western border of Rwanda just on the Albertine rift valley/Great Western Rift Valley. This is one of the most beautiful fresh lakes in the world and it is found on the extreme side of Rwanda bordering the D.R. Congo.

Lake Kivu is an important natural feature in Cyangugu, Kibuye, and Gisenyi districts in Rwanda. The 27000sq.kms Lake Kivu is shared between Rwanda and Congo making it an important area of interest on Rwanda safaris or Congo tours. 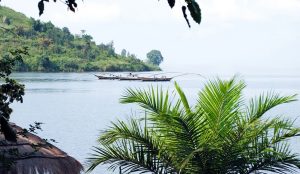 Lake Kivu is one of the largest freshwater lakes on the African continent ranked in the 7th position. Lake Kivu feeds the Rusizi River which also flows southwards to Lake Tanganyika of Tanzania. The Lake is 90kms long and has a width of 50kms with an irregular surface shape which makes it a little hard to determine the real surface area. It is Rwanda’s biggest freshwater lake and one of the deepest lakes with a depth range of 475m ranking it the 8th deepest on earth.

Lake Kivu creation dates back to 1000 years ago and it formed as a result of volcanic activity in the area. it is strategically found in Idjwi Island also ranked as the 10th largest island in the world. Idjwi Island is found within the Virunga National Park borders in Congo.

The marine life in Lake Kivu includes 4 barb species such as ripon, red spot, east African red finned barb, and pellegrini’s barb. There are also two catfish species such as Amphilius and Clarias plus many other species like redbreast tilapia, blue spotted tilapia, Nile tilapia, Longfin, and Sardine. In addition, there are 4 crab species living in the fresh waters of Lake Kivu.

Safari Activities to do in Lake Kivu Rwanda

Birding in Lake Kivu is a great opportunity for birders to look out for interesting birds living in the lake. A total of 60 bird species reside in Lake Kivu and they include the speckled pigeons, spotted yellow-throated greenbul, African pied wagtail, Ashy flycatchers, bronzed sunbird, chin-spot batis, cardinal woodpecker, common waxbill, tropical boubou to mention but a few.

Boat cruise excursions on Lake Kivu are an amazing way to explore and experience this freshwater lake on Rwanda safari. The boat rides take you to one of the beautiful islands, especially Nyamirundi Island and explore more about the extensive coffee plantation and how coffee is processed for consumption.

Lake Kivu is one of the best places to consider for swimming. The lake is a hippo or crocodile-free area making it an ideal place to enjoy recreational activities such as swimming the ideal sites to start your swimming experience include Gisenyi, Cyangugu, and Kibuye.

This is the home of the orphaned children of the victims of the 1994 Rwanda genocide. This was established by the late Rosamond Carr who was a tight friend of the late Dian Fossey. The orphanage was relocated when the civil war intensified and it began with 400 orphans.

Nyamirundi Island features among the charming island’s tourists on Lake Kivu safaris can visit on Rwanda safaris. The magical island is located near Gisenyi and it is known for coffee cultivation as the main economic activity. Visiting this island is a great chance to learn about coffee farming and the process it takes to have coffee ready for consumption.

Lake Kivu lies near the Equator and experiences the best weather conditions throughout the year. But, for excellent experiences, the dry season is the best time to travel for a vacation in Lake Kivu and this is from June to September/December to February.

Places to consider for an overnight stay at Lake Kivu

How to get to Lake Kivu Rwanda

For tourists on Nyungwe Forest National Park in the Southern Province of Rwanda, they can also connect to Lake Kivu while en route to Volcanoes National Park a home of mountain gorillas and other mammals, birds, reptiles, floral species, etc. Other surrounding towns to Lake Kivu include Kalehe, Sake, Bukavu, and Goma.