Situated in the East of Rwanda, Akagera National Park is the only safari destination offering game viewing opportunities in this part of the World. These adventures bring a new meaning to Rwanda safaris as there are chances of encountering the big five game (Rhinoceros, leopards, Cape buffaloes, lions, and African bush elephants). There are currently four National Parks in this country and while Akagera National Park is savannah-dominated, the remaining three are forest-dominated. 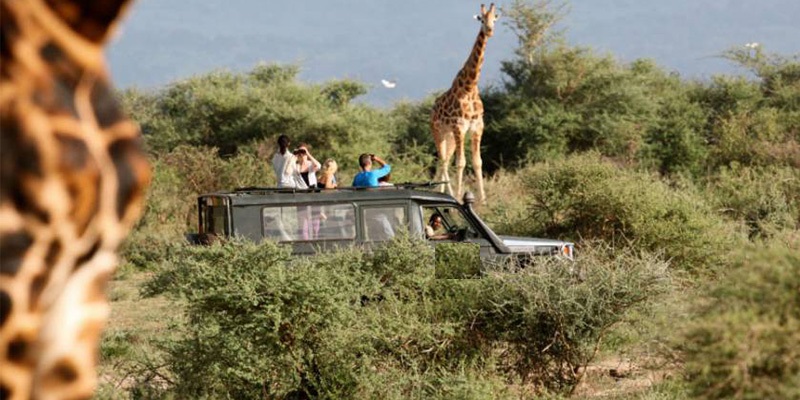 For its remarkable size of 1122 square kilometers, Akagera National Park is the largest Protected Area in Rwanda with diverse natural habitats that include sweeping savannah plains, the low mountain area dominated by woodlands, wetlands, pockets of forests and so much more. This spectacular Protected Area is divided into two sectors-Northern and southern with big mammals as well as the majority of accommodation facilities being mainly in the latter while the former is filled with smaller game.

So far, Akagera National Park has over 8000 large mammals that include Rhinoceros, Cape buffaloes, African bush elephants, Hippos, Zebras, Roan antelopes, Cape elands, Masai giraffes, and Defassa waterbucks. There are also spotted hyenas, bushbucks, Klipspringers, duikers, Topis, impalas, Oribis, serval cats, Kobs, and many others. Game viewing in Akagera National Park is run by Akagera Management Company (a Company in charge of managing this Protected Area and its beautiful resources after a joint Agreement between the Rwanda Development Board and African Parks).

Game viewing tours within Akagera National Park are charged based on whether it’s half or full day, and the latter starts as early as 6:00 am to catch up with the nocturnal before they return to their hideouts. For the half-day, you can either begin in the morning or any time of the day. This activity is also recommended for children under 10 years to watch different animals that call Rwanda’s wilderness home.

There are three main ways to undertake game viewing in Akagera National Park and they include game drives, walking safaris, and even boat cruises where different kinds of animals are spotted. The game drives, are done aboard 4×4 safari vehicles and with expert Ranger guides onboard to provide information on the Park’s unique ecosystem, animals, and birds encountered along the way. This type of game viewing covers a significant area of the Park hence the chances of spotting more wildlife that include Rhinoceros, Kobs, Defassa waterbucks, Cape buffaloes, Topis, and Masai giraffes, African bush elephants, spotted hyenas, bushbucks, leopards and so much more.

For the walking safaris, travelers get an up-close and personal feeling of the wilderness, since they not only see the outstanding wildlife species but also get to understand the real rhythm of Akagera National Park’s secluded wilderness. Here, places that aren’t reachable by a vehicle like forests, and while you can undertake game drives without Ranger guides, they are indispensable during this adventure as their diverse knowledge of the animals, birds, and vegetation are required and priceless.

Boat rides on Lake Ihema are also an unrivalled way of game viewing in Akagera National Park and mainly provide an insight into the aquatic and wetland life within this Protected Area like the Sitatunga, Hippos, and Nile crocodiles although the Elephants, Cape buffaloes, antelopes, and others are spotted during the activity. Are you interested in adding bird watching to your game viewing experience? Then book for the boat ride where your chances of seeing African fish eagles, Grey-crowned cranes, Hamerkops, giant and pied kingfishers, and Cattle egrets are higher than it is with another activity.

While Akagera National Park is considered an all-year-round safari destination, it is marked by two different seasons, and deciding on when to visit the Protected Area largely depends on your personal safari experience.

Most travelers to this magnificent Protected Area obviously go for game viewing and therefore, there is no question that the dry season from June to September and December to February is considered the ideal time for game viewing. During this season, vegetation is generally low and sparse hence making wildlife easier to sight and follow in addition to the permanent watering sources like Lakes and Rivers providing remarkable game viewing experiences.

Also, there are fewer mosquitoes during these months, owing to the little or no rains in addition to the temperatures being delightfully warm during the day as well as refreshingly cool at night. Water points dry-out in the Park leaving the permanent ones like major Lakes and Rivers thus making wildlife concentrations to be higher in these places. All in all, game viewing is said to be at the peak in Akagera National Park.

Rains normally begin in March to May and then again in October to November, which changes Akagera National Park into a spectacular, thriving lush landscape thus providing unmatched photography. Interestingly, game viewing is still amazing with numerous young animals born in the wet season. Additionally, this is the perfect time for watching birds in Akagera National Park.

What to pack for game viewing in Akagera National Park